Skip to content
HomePosts tagged 'data ganj bakhsh biography'
Hazrat Data Gannj-e-Baaksh Ali Haajveri (رَحْمَۃُ اللہِ تَعَالٰیعَلَیْہِ) was born in 400 A.H. in “Ghaazni” Afghanistan. He was from a Syed family “heir of the holy Prophet (صَلَّی اللہُ تَعَالٰی عَلَیْہِوَاٰلِہٖ وَسَلَّمَ)”. He was the 9th heir of Hazrat Ali (رَضِیَ اللہُ تَعَالٰی عَنْہُ) Lion of Almighty Allah (عَزَّوَجَلَّ). After the catastrophe of “Karbobala” many of the heirs of Hazrat Ali (رَضِیَ اللہُ تَعَالٰی عَنْہُ) separated to different continents and between them were his ancestors who immigrate to Afghanistan.
He was also sanctified with sincere ancestry to the holy Prophet (صَلَّیاللہُ تَعَالٰی عَلَیْہِ وَاٰلِہٖ وَسَلَّمَ) due to his mother who was an heir of Hazrat Imam Hussein (رَضِیَ اللہُ تَعَالٰی عَنْہُ). His mother was tremendously loyal to spiritual ritual and was dedicated to advancing the well-being of the needy and the anguishing. He achieved his prior development of knowledge in Afghanistan by recalling heartily the holy Quran. Then he achieved the
knowledge of wisdom, Hadith, Arabic and Fique. At that time “Ghaazni” a city of
Afghanistan was the midpoint of knowledge in key Asia and it was the territory of
the glorious Afghan emperor Sultan Mahmoud Ghaznavi.
After achieving the secular knowledge he explored for the religious
knowledge. He journeyed to various parts of the world for this specific
objective and straight-out transformed into a divine adherent of “Hazrat Abuul
Faazal Muhammad bin Khaatli (رَحْمَۃُ اللہِ تَعَالٰی عَلَیْہِ)” who was
dwelling in Syria.

In Syria he began his religious education under the counseling of Hazrat Abuul Faazal (رَحْمَۃُ اللہِ تَعَالٰی عَلَیْہِ), he ate and slept very less and carried out tough study & self-examination. He meet many Sufi’s saints on a journey to various countries like Syria, Iraq, Iran, Turkey and many Arab countries.
Soon he was ordered by his divine teacher Hazrat Abuul Faazal
(رَحْمَۃُ اللہِ تَعَالٰی عَلَیْہِ) instructed him to go to Lahore to exhort the religious guidance of Islam. He stated:
“Hazrat Shah Hussein Zaanjaani (رَحْمَۃُ اللہِ تَعَالٰی عَلَیْہِ) is present there for this job so why
should I go to there? Hazrat Abuul Faazal (رَحْمَۃُ اللہِ تَعَالٰی عَلَیْہِ) stated: “Don’t ask questions just travel towards the city of Lahore.” So he migrated from Syria to Lahore in (431 A.H) 1041 A.D. When he arrived in Lahore he witnessed that people were shouldering a casket toward the burial ground for funeral. He inquired whose funeral is it? People answered “it is the funeral of Hazrat Shah Hussein Zaanjaani (رَحْمَۃُ اللہِ تَعَالٰی عَلَیْہِ)”. Hearing upon that he speculated why his spiritual tutor ordered him to travel to Lahore. After arriving in Lahore he began preaching Islamic laws and he even constructed a masjid (mosque).
When Hazrat Ali Haajveri (رَحْمَۃُ اللہِ تَعَالٰی عَلَیْہِ) started constructing the masjid (mosque) itsfront was slightly towards the south and the direction was not similar to other
masjid (mosque) of Lahore. The Religious Scholars of Lahore criticized but he
did not answer them. When the masjid (mosque) was completely constructed he gatheredall Islamic scholars of Lahore and stated: “Your objection was that the
direction of Ka’bah “Kiblah” is incorrect now look for yourself and see in which
direction Ka’bah really is!” To their astonishment they were sitting just before
the holy Ka’bah in Makkah Mukarramah. All the religious scholars were startled
to witness his marvels and felt humiliated and apologized heart fully.
He also constructed a building adjoining the masjid (mosque) and utilized that structure as “Khanqaah” Religious School. Many skeptics agreed upon Islam on his hands and many more conquered the utmost level of spirituality under his counseling. He joined in holy matrimony two times but twain of his wives demised soon after the marriage.

Hazrat Data Gannj-e-Baaksh Ali Haajveri (رَحْمَۃُ اللہِ تَعَالٰی عَلَیْہِ) spent his life educating, advising, and encouraging and motivating and originating the statement of truth. Thousands of benighted people transformed into  Islamic scholars, masses of people welcomed Islam, the uncertain began to follow the straight Path, the preposterous found sense and soberness, the unlawful  became lawful and the wrongdoers became righteous under his powers. 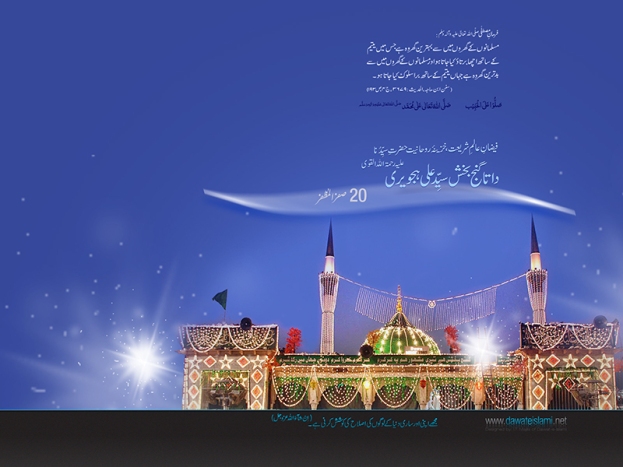 He has scripted various books but this particular book has a predominant spot in the
world of Sufism and it is scripted in Persian jargon. This specific publication symbolizes Sufi ideology such as Maarifaat, Tareeqat and Waylayaat in such an idea that they mirror the requirements of comprehensive age. For instance, this very script was beneficial 900 years back and is beneficial at the present-day and will be beneficial for as long as Almighty Allah (عَزَّوَجَلَّ) desires it to be.

If you do not have a (Mursheed) you should interpret this book and by the sanctification of reading it you will discover your (Mursheed).This book is like a spotless (Mursheed) in Persian jargon dazzling like an uprising light in the dark path with no other race. This script is one of the finest and genuine scripts of Sufism. This very book on the subject of Sufism attracts all the dominant Sufi Saints of India to obtain real counseling and it is treated as “Toraath and Bibble” of Sufism.

Hazrat Syed Ali Hujwairi (رَحْمَۃُ اللہِ تَعَالٰی عَلَیْہِ) also recognized as Data Gannj Baaksh (رَحْمَۃُ اللہِ تَعَالٰی عَلَیْہِ) influence powerful physical place in the Ahle Tareeqat holy persons and is an eminent Sufi scholar. Unlimited personalities acknowledge him as a wise Sufi scholar and his script Kaash-al Maajub is one of the best credible books of Sufism. This script does not only have the descriptions and saying of the Sufi scholars but also has deep-seated organs of genuine Sufi substantial. This particular book (Kaash al-Mahjoob) portrays the entire “Mursheed” guidance. The Islamic Scholars and spiritual saints have altogether advised the value of this specific book greatly.

This script particularly frees the saintly birds of guidance and smooth’s way,

uplifting the hearts with radiant lights removing dirt and the reader of this book harvests the real perceptive of Islamic laws (Sh
ariat). This certain book washes spiritually the inner heart and abolishes the
secret hurdles within characters. This particular book consists of life histories of many Islamic ideals and the style in which it is scripted welcomes the cool breeze of guidance for those who eye this specific book. This script is very comprehensive as it aids the learners of Sufism in each and every age.

Oh learners of Sufism, May Almighty Allah (عَزَّوَجَلَّ) grant you with the compensation of both the worlds, and he further states: By scripting this book my ambition was to fulfill all the needs of the reader and to insure that he may not obtain any other book and that this particular book will be more than enough for the learners of Sufism.